Only few days ago, organisers warned of possible Turkish attempts to disrupt the Holocaust and Hrant Dink Commemoration event planned to be held in Cardiff (Wales, UK) at recently erected Armenian Genocide Memorial. Particularly, their press release indicated that "Hal Savas and his "Committee for the Protection of Turkish Rights" has told the South Wales police that they intend to protest nearby." However, the reality they encountered was uglier than it was thought would be. 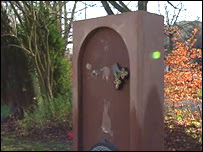 Below is the press release received from the Wales-Armenia Solidarity (with the support of Nor Serount Cultural Association).

The tiny Welsh Armenian community were targeted with a despicable racist attack on Holocaust Memorial Day. The new Armenian Genocide Monument (which was erected by the community under the leadership of John Torosyan in November) was desecrated in the early hours of the morning before important ceremonies were held today to Commemorate the Holocaust, and to remember Hrant Dink. The ornate Armenian Cross on the monument was smashed to bits by persons unknown using a hammer, which was left at the scene of the crime.

One of the Welsh Armenians said:"This is our holiest shrine. Our grandparents who perished in the Genocide do not have marked graves. This is where we remember them"

Eilian Williams of Wales Armenia Solidarity said that he blamed the so-called "Committee for the Protection of Turkish Rights" britishcptr@aol.com under the leadership of Hal Savas (mobile number 07770302822) for the crime. The police took the hammer for fingerprints.

He continued:"I call on Armenians and other sympathisers throughout the world to send messages of support to Wales Armenia Solidarity (eilian@nant.wanadoo.co.uk ) which we can send to the Prime Minister of the National Assembly of Wales. We shall repair the cross again and again no matter how often it is desecrated. We also challenge the UK government and the Turkish Embassy to condemn this racist attack.

The Holocaust commemoration was a gesture of friendship by Welsh Armenians towards the Jewish and Roma communities .

During the Prayers for the Holocaust victims, the said Turkish Committee used a loud-speaker to disrupt proceedings.

I am re-posting 2 photos from my previous post of Armenian Genocide memorial which was unveiled in Cardiff on 3 November 2007. Racists will not succeed in their attempts! 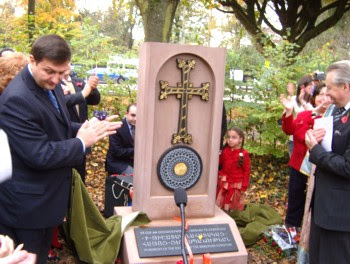 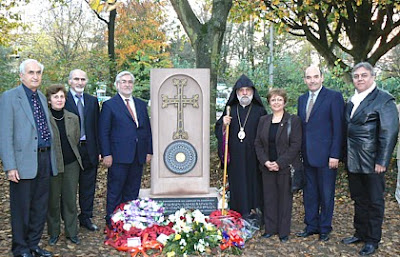